The Strongest Brothers in History

Scottish Brothers Luke and Tom Stoltman are arguably The Strongest Brothers in History. In 2019 they both reached the World's Strongest Man finals, with Tom placing 5th and older brother Luke taking 7th. They were the first brothers in history to achieve such a feat.

Younger brother Tom has since been crowned the 2021 World's Strongest Man in Sacramento, USA. Tom went on the win his first Britain's Strongest Man title at the Utilita Arena in Sheffield in October 2021. He is also a two-time Scotland's Strongest Man champion, and finished as the runner-up at the 2021 Rogue Invitational. Additionally, he holds the Atlas Stone world record of 286 kilograms (630 pounds).

Older brother Luke placed 7th in the finals of 2021 having been in contention until the last event. However, in September 2021 he won one of the most major titles in strongman when he became Europe's Strongest Man. He is also a five-time winner of Scotland's Strongest Man.

Tom and Luke live and grew up in Invergordon, in the Highlands of Scotland. Before becoming a professional Strongman, Luke worked as a dimensional surveyor on offshore oil rigs in the North Sea.

Tom was diagnosed with autism at the age of 5. He feels this has helped him in his rise to the top of the sport and views autism as his superpower. He has become a major advocate for speaking out about overcoming the challenges it can bring and is keen to inspire other young people to achieve whatever they want in life. 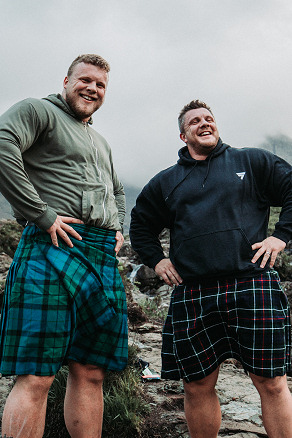