Pooch Perfect consultant and internationally renowned dog groomer, Stuart has always had a love of animals. As a child his mother would despair as he would rescue unwanted pets and bring them home to look after. He once rescued 15 Chinchillas that had been released on to a main road from the back of a Thai Restaurant and successfully re-homed them all. His love for animals and their welfare goes before anything else.

Stuart started grooming nearly 20 years ago, as a side hustle when his main job was in musical theatre after winning a radio competition which gave him the money to train and set up his first salon. He still does musicals and cabaret, and has a second salon in east London. He had the idea when he was visiting family in Vero Beach, Florida, in 2004, and noticed that there were groomers on every corner.

Stuart is the Owner and Proprietor of Groom Dog City, a hugely successful Grooming Salon in London's East End and voted No1 in the UK in 2020. He is in Partnership for Tails of St Leonards, another Salon In East Sussex.

He holds a master certification with the N.A.P.C.G. (National Association of Professional Creative Groomers) and is currently the only certifier in Europe for the association. Something he is hugely proud of. He gained much attention within the industry for grooming Emma Watsons dog and safely dyeing her pink in aid of a cancer charity.

Having groomed for many TV Shows including The Jonathan Ross Show, Alan Titchmarsh, This morning, Russell Howard and many more, he is no stranger to public speaking. No one in the industry is better placed as far as public appearances go. He often jokes that he had to become a dog groomer to get success as a performer.

He is the MC for the majority of Dog Grooming Competitions in the UK and also judges both in the UK and abroad including the USA. He has Judged numerous shows including UK Groom Off for Pets at Home, Groomer of the Year for The Pet Industry Federation, The Groomers Challenge for The English Groomers Group, The Grooming Show, Mastergroom and the Irish Professional Dog Groomers Association.

In 2017 he launched The Groomers Spotlight with Julie Harris, a website directing people to find qualified groomers in their area. He feels that it is hugely important that the public know that their groomer is trained in all aspects of the job and is a campaigner for regulation within an, as yet, unregulated profession. 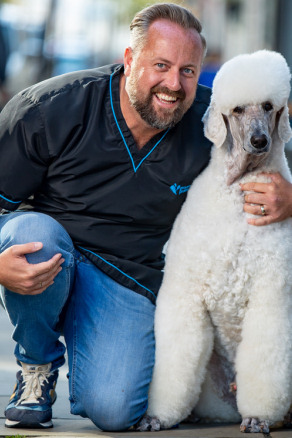